skip to main | skip to sidebar

Language is not only a product of human life – it is a pre-requisite that humans require to form relationships. As a fundamental form of expression, language binds us together.

A language can be visual – made up of complex ideas of truth deeply rooted in symbols, custom and imagery. Mother Tongue is about the power of language – verbal and visual, formal and informal. First language. Native language. It honours languages at risk of being lost in our globalising society and those that have survived the forces of colonisation.

“We need a culture shift. Can design reconcile differences? “Let’s begin a journey of understanding – fostering a new respect for life, nature and the natural world. Let’s value the principles of truth, honesty, generosity, equity and kinship.”

The official logo, visual identity and slogan for UEFA EURO 2012™ have been unveiled at a special event in Kyiv's Mykhailivska Square with co-hosts Ukraine and Poland looking forward to 'Creating History Together'.

Visual identity
The purpose of the logo is to give UEFA EURO 2012™ a personality of its own, with the visual identity to be applied across a range of promotional applications from tickets to web banners. The objective is to help promote the tournament – one of the world's biggest sporting events – by providing an easily recognisable identity with a flavour of the host nations. The logo takes its visual lead from 'wycinanka', the traditional art of paper cutting practised in rural areas of Poland and Ukraine, as a tribute to the fauna and flora of the region.

EURO bloom
The 'bloom' logo has a flower representing each of the co-host nations and a central ball symbolising the emotion and passion of the competition, while the stem denotes the structural aspect of the competition, UEFA and European football. Nature has inspired other features of the visual identity, with woodland green, sun yellow, aqua blue, sky blue and blackberry purple being the crucial tones of the palette of colours to figure in official tournament branding.

Uniting ethos
The event slogan, meanwhile, is 'Creating History Together'. The staging of the UEFA European Championship finals in Poland and Ukraine, a first for Central and Eastern Europe, will have a place in the history books, with everyone involved in UEFA EURO 2012™ – organisers, host countries, host cities, players and fans – contributing to another exciting chapter of European football. 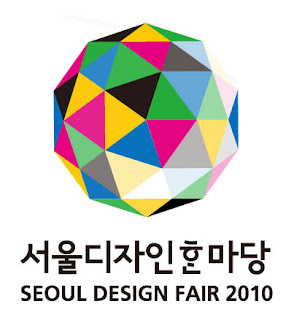 Seoul (South Korea) - The Seoul Metropolitan Government will host the Seoul Design Fair, an Icograda endorsed event, for 21 days from 17 September - 7 October at the Jamsil Sports Complex and four other venues in Seoul.

Formerly known as 'Seoul Design Olympiad', the third annual event to promote harmony among citizens through design will open under the theme of 'Design for All', featuring 44 academic and cultural events organised in the three broad categories: Economy, Participation and Education.

Even though the registration deadline for the Seoul International Design Competition is still one month away, over 2 600 applicants from about 100 countries (as of 7 June 2010) have already submitted their applications.

This year, there has been a particularly sharp increase in participation and interest by overseas design companies and designers in the Overseas Design Industry Exhibition and the Seoul Design Market, which have been organised as part of 'Design for the Economy'.

Design for the Economy section of the event focuses on stimulating economic revitalisation with design innovation as a primary engine for growth. To this end, various plans will be executed to promote business and industrial activities and exchanges. The project includes design exhibitions joined by domestic and overseas design companies. Additionally, the Seoul Design Market will also be as part of the project, allowing domestic and overseas designers to meet their customers and sell their products on site.

Global citizens will also be invited to take part in 'Design for Participation' programs, in which the 'Green Garden Panorama' and other eco-friendly exhibitions will take place in each of the 25 autonomous districts (called 'gu') in Seoul and universities. Autonomous districts will put 'participation' into practice by filling all 29 500 seats of the main stadium with green plants and sell them to donate the proceeds to the socially disadvantaged.

Two side events of the section; The Seoul International Design Competition 2010 in search of up and coming design talent and the Seoul Bicycle Design Competition Festival to conceptualises 'eco-friendly transportation and living', will definitely be 'must see' events organised to encourage the participation of both designers and the general public.

'Design for Education' programs, on the other hand, will shed light to the design industry's future through a wide range of hands-on educational events for children, such as the Hall of Idea Imagination, the Design Class for Future Artists, as well as various other programs for both adolescents and grownups including the Public Design Academy, Green Garden Panorama, University Students Design Exhibition, plus conferences and competitions.

At the 'Hall of Imagination', there will be educational tours organised for children, while the 'Design Class for Future Artists' will feature professionals specialising in toy design and early childhood design education. The Public Design Academy is expected to help visitors understand design easily by combining familiar cultural content, particularly IT, music and the arts, to enhance the awareness of the importance of social and cultural values of design in our lives.

Design fair to feature educational and fun-filled events for everyone
One of the most outstanding new features of the Seoul Design Fair is the external uniqueness of the major pavilions in the stadium. The three major pavilions, which depart from the existing air dome style, were designed respectively by three of the greatest contemporary architects in the world: Alessandro Mendini from Italy, Daniel Libeskind from the United States and Kim Seok-Chul from Korea.

These pavilions will be set up to collectively represent the World Design Capital Seoul and individually to stand for La Punta - the Summit, the Trinity of the Sky, The Earth and Mankind, and Cohesion and Harmony.

One of main purposes of the Seoul Design Fair's is improving the quality of life for citizens. Additionally, the event is also meant to contribute to job creation and urban economic development. To this end, the Seoul Metropolitan Government has focused more on industrial exhibitions, market places and business support programs for this year.

According to Dr. Hee-Gon Hwang from the Hallym Institute of Advanced International Studies, approximately 8 000 jobs could be created and over 500 million dollars of production-induced revenue. Most of the programs and events of this global citizens' festival will be open to the public for free.